The secret behind the signs 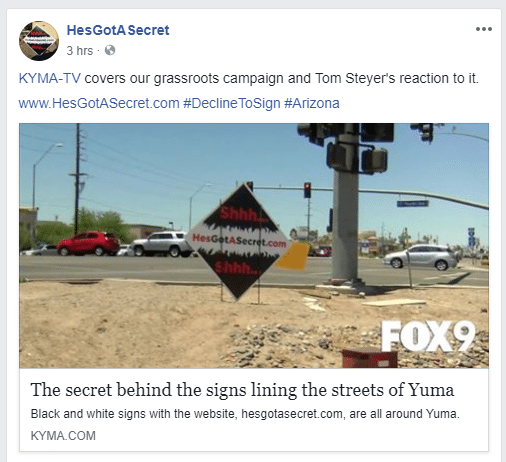 Black and white signs with the website, “hesgotasecret.com,” are all around Yuma.

“This is a grassroots group made up of people who are concerned about the astronomical rise in utility rates that would occur if this initiative were to be put onto the ballot and passed,” said Barrett Marson, spokesman for Reliable Energy Policy.

The initiative that they are working to keep off of the ballot would require electric providers to provide at least 50 percent of the energy they provide to their customers from renewable energy sources by 2030.

However, Marson claimed that not only will rates rise if the initiative makes it onto the ballot and passes, his group does not believe the motives of its founder Tom Steyer.

“Clearly Tom Steyer wants to bring his brand to across the country,” said Marson.

“The ballot initiative by California billionaire Tom Steyer is irresponsible and bad for customers. It will dramatically increase electricity bills, kill thousands of jobs, eliminate millions in tax revenue, potentially increase carbon emissions in Arizona and make our state a less attractive place to do business,” said APS.

Clean Energy for a Healthy Arizona said that is not the case.

“What we would like to see is an honest, open debate about clean energy because Arizonan’s deserve the choice that seems right to them,” said Rodd McLeoz, spokesman for Clean Energy for a Healthy Arizona.

In terms of costs for Arizonans, the initiative does not have an exact number now but will have a study coming out in early June that will include an evaluation of what costs will look like if the initiative passes versus if it does not.

“Solar used to be very expensive, but the price has gone down a lot. It’s now cheaper than building a gas plant,” said McLeoz.

Clean Energy for a Healthy Arizona needs 250,000 valid signatures for their initiative to make the ballot in November.

Since APS is the only electric provider in the Yuma area, News 11 asked if they were associated with the information campaign. They said no and released a statement that said they do not support the energy initiative.