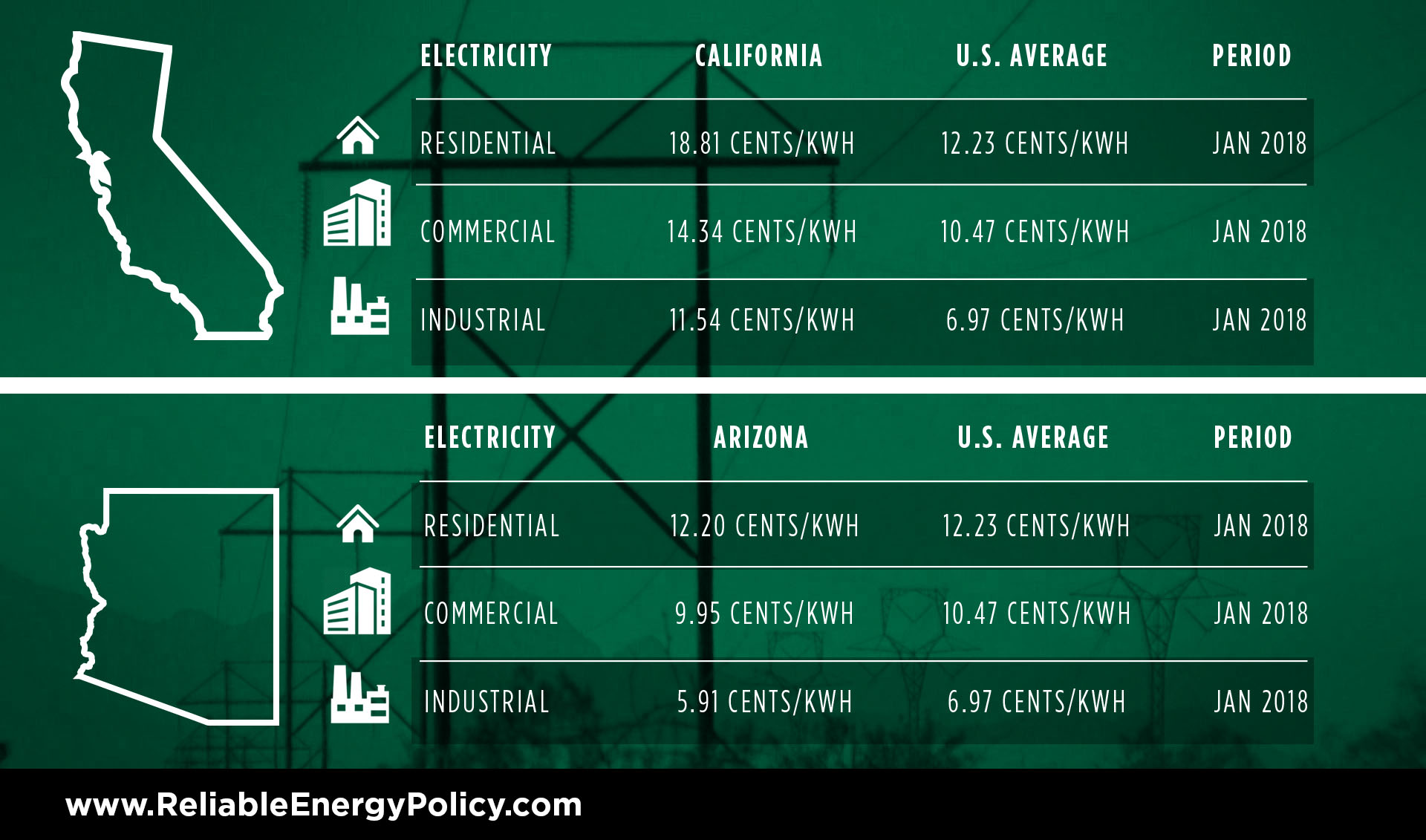 Arizona’s Palo Verde Nuclear Generating Station, rated at 3,937 net megawatts, is the largest nuclear power plant, the largest net generator of electricity, and the second-largest power plant by capacity of any kind in the nation. – This Energy Source is excluded from the Steyer initiative.

Arizona, the 14th most populous state, ranked 44th in the nation in per capita energy consumption in 2015, partly because of the state’s small industrial sector.

Arizona’s only operating coal mine, Kayenta, on the Navajo and Hopi reservations, supplies all of its coal to the Navajo Generating Station. The station is scheduled to close in 2019, removing nearly two-fifths of Arizona’s coal-fired capacity from service.

In 2016, natural gas provided the largest share of Arizona’s net electricity generation, surpassing coal’s annual contribution for the first time.  This energy source is excluded from the Steyer Initiative.

Transportation is the largest end-use energy-consuming sector in Arizona.

Because Arizona’s primary economic activities are not energy intensive, the state’s per capita energy consumption is among the lowest in the nation.16 The transportation sector is Arizona’s largest end-use energy consumer, followed by the residential sector. 17

Almost three-fourths of the natural gas consumed in Arizona is used for electric power generation.

Arizona’s Palo Verde Nuclear Generating Station is the nation’s largest nuclear power plant and is second only to the Grand Coulee Dam in total electricity generating capacity.52 It is Arizona’s largest power plant. The Navajo Generating Station is the second-largest power plant in the state and the largest coal-fired facility. However, in 2016, natural gas provided the largest share of the state’s net generation, surpassing coal’s annual contribution for the first time. Between 2004 and 2009, natural gas power plants’ contribution to the state’s net electricity generation exceeded that of nuclear power, and in 2015, natural gas once again surpassed nuclear power.53 In 2016, natural gas and nuclear energy each supplied close to one-third of the state’s net generation, and coal provided slightly more than one-fourth. Renewable resources, mostly hydroelectric power and solar, provided the balance. 54

Power plants in Arizona generate more electricity than the state consumes, and Arizona generating stations supply electricity to consumers throughout the southwest.55,56,57 Transmission lines have become congested in peak demand periods. Arizona has been working with other states and stakeholders on multiple projects to improve transmission capacity. Among them are projects that will transmit electricity from Arizona and New Mexico to areas across the southwest.58 Another project in development will bring renewably sourced power from Wyoming to population centers in the desert southwest, including Nevada, Arizona, and Southern California.59 An additional proposed transmission project would connect areas of southeastern California to southwestern Arizona, facilitating renewable energy development along the route.60

Electricity is crucial for pumping water for drinking and irrigation from the Colorado River in the north to the drier central and southern parts of Arizona.61 More than four-fifths of the state’s population lives in south-central Arizona.62 However, per capita retail electricity sales in Arizona are near the bottom one-third of the states even though about 3 in 5 households rely on electricity for home heating, and more than 9 in 10 homes have air conditioning.63,64,65,66,

Arizona’s renewable energy standard requires that investor-owned electric utilities and retail electricity suppliers acquire increasing amounts of the electricity they sell from renewable resources. The overall target is 15% of retail electricity sales by 2025. Each year, a total of 30% of the year’s required renewable energy target must come from non-utility distributed (customer-sited) generation. Half of the distributed generation requirement must come from residential sites and the other half from non-residential installations.67 The state allows net billing, which credits new customer-generators with the avoided costs for energy exported to the grid and facilitates distributed renewable generation.68 Key to developing the state’s renewable resource potential on a large scale is adding the transmission capacity needed to carry the electricity from remote sites, where it is generated, to urban markets for consumption. State, regional, and federal stakeholders have joined together to expand the transmission infrastructure in Arizona.69,70 In addition to encouraging the development of Arizona’s renewable resources, the state has established energy efficiency standards that require investor-owned electric utilities, electric cooperatives, and natural gas utilities to increase energy efficiency to reduce consumption of both electricity and natural gas.71 Investor-owned utilities have 2.5% electricity savings targets for 2016 through 2020.72

The Glen Canyon and Hoover Dams, among the largest power plants in the state, provide most of Arizona’s net hydroelectric generation.
In 2016, renewable energy provided more than 12% of Arizona’s net generation. More than one-tenth of that generation was distributed (customer-sited). However, slightly more than half of the state’s renewable net generation comes from utility-scale hydroelectric power.73 The Glen Canyon Dam and Hoover Dam, both located on the Colorado River in northern Arizona, are among the largest power plants in the state and provide most of Arizona’s net hydroelectric generation.74Although hydroelectric power has long dominated Arizona’s renewable electricity generation, solar energy is providing increasing amounts of generation.75 In 2016, solar energy accounted for about 5% of Arizona’s net electricity generation, almost one-third of it from distributed sources.76 Arizona has one of the largest solar energy potentials of any state, second only to Nevada.77 Arizona’s first commercial solar photovoltaic (PV) array went into service in 1997, and, by 2014, one of the world’s largest solar PV facilities was completed in Yuma, Arizona.78,79Arizona is also one of four states that generates electricity using concentrating solar power technology.80 The state’s total installed solar-powered electricity-generating capacity has increased substantially over the past two decades. Arizona ranks third in the nation in solar capacity, after California and North Carolina. 81

Arizona has some wind potential, mainly along and just north of the steep-walled Mogollon Rim that cuts across the central part of the state.82 The first commercial-scale wind farm in Arizona became operational in 2009.83 But, in 2016, wind provided only 0.5% of the state’s net electricity generation.84Arizona has geothermal resources, as well; however, there are no utility-scale geothermal power plants in the state.85 Arizona has many hot springs, a few small spas, and several direct-use applications, including an active aquaculture industry that uses geothermal resources to raise shrimp and other fish. Some deeper high-temperature resources, particularly in the central and southern parts of Arizona, may be suitable for power generation.86,87

Arizona is home to 21 federally recognized Native American tribes, 22 tribal governments, and most of the nation’s largest reservation, the Navajo Nation.88,89,90 As tribes and individuals, Native Americans control more than one-fourth of Arizona’s land—the largest proportion of any state and second only to Alaska in total acreage.91 Almost all of Arizona’s energy mineral resources are on the state’s tribal lands.92 The largest producing oil field in Arizona—Dineh-bi-Keyah, The People’s Field—is on the Navajo reservation. Although production is now modest, the field has produced almost 19 million barrels of crude oil since its discovery in the mid-1960s.93 Arizona’s coal reserves are also on tribal land.94 The state’s only operating coal mine, Kayenta, is in the Black Mesa coal field on the Navajo and Hopi reservations.95In addition to the Navajo Generating Station, which will close by 2019, several natural gas pipelines, electricity transmission lines, and hydroelectric dams are located on Arizona’s tribal lands.96 From 1944 to 1986, almost 4 million tons of uranium were removed from more than 500 mines on Navajo Nation land, most of them in Arizona. Those mines are now closed.97 Renewable resources are abundant in Arizona, and they offer opportunities for electricity generation, especially on tribal lands in remote areas. Tribes are assessing their solar, geothermal, wind, and biomass resources for onsite generation of electricity.98 Three of the top five tribes with the greatest electricity generation potential from solar resources are in Arizona, as are two of the five tribes with the greatest electricity generation potential from geothermal resources.99 Although the Navajo reservation in Arizona has historically had the highest percentage of households without electricity among the nation’s reservations, it is the reservation with the largest solar and geothermal potential.100,101 The first large-scale solar PV facility on Navajo land, with 27-megawatts of capacity, came online in 2017.102 Several planned wind projects in Arizona, including some on tribal land, have not gone forward as the emphasis has shifted to developing solar projects. However, wind energy opportunities are being explored by the Hopi Tribe and the Hualapai Tribe.103