Briefing on 2018 Summer Loads and Resources Assessment for California results 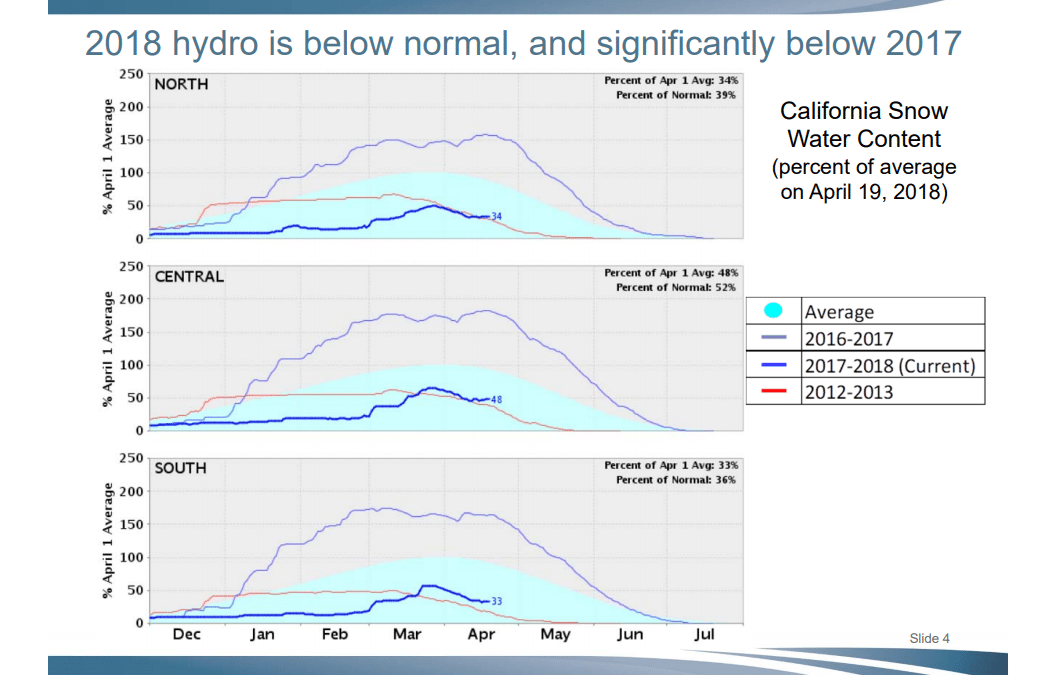 The ISO’s 2018 Summer Loads and Resources Assessment presents the expected
supply and demand conditions for the 2018 summer peak demand period. This annual
assessment helps the ISO, industry participants, and other key stakeholders in planning
and preparing grid operation for the upcoming summer season. This briefing provides
the ISO Board of Governors with results and information on the following topics that will
be included in this year’s assessment:

• Forecast of ISO peak demand for 2018;
• Assessment of capacity margins in the ISO system under diverse operating
conditions and scenarios;
• Discussion of current hydro conditions and expectations for the summer power
supply;
• Generation additions and retirements; and
• An update on the status of the Aliso Canyon gas storage facility.

Summary
In preparing for the 2018 Assessment a number of modeling enhancements were made
to achieve model results that more closely align with the issues and limitations that ISO
operations faces during extreme high loads as well as more normal operating
conditions. Noteworthy modeling enhancements that were made include the following:

• Use of historical unit by unit forced outage rates.
• Removal of the day-ahead unit commitment process that committed units in the
day-ahead to be available for meeting flexible capacity requirements the
following day.
• A shift from reporting the operating reserve margin to an unloaded capacity
margin, which more closely portrays the amount of capacity that operations can
bring on line in a short period of time to deal with unexpected contingencies such
as resource forced outages.

Major findings for the 2018 Assessments
As of April 2, 2018, the Northwest River Forecast Center projected the April to August
reservoir storage in the Dalles Dam on the Columbia River to be 118 percent of
average. Summer 2018 water supply projections for the Pacific Northwest are similar to
2017 levels. There are no concerns with Pacific Northwest hydroelectric generation.

Available Generation
The ISO projects that 51,947 MW of net qualifying generation capacity will be available
for summer 2018. From June 1, 2017, to June 1, 2018, approximately 692 MW of
additional generation is expected to reach commercial operation, with 40 MW in the
southern portion of the ISO system and 652 MW in the northern portion of the ISO
system. Of the 692 MW, approximately 60 percent is solar, 24 percent is biofuel, 7
percent is wind, 7 percent (48 MW) is gas, and 2 percent is hydro. During this same
period, 860 MW of generation is expected to retire, 837 MW is gas and 23 MW is
geothermal. Of the 837 MW of gas, 67 percent are once-through cooled facilities. The
net reduction in dispatchable generation is 789 MW (837 MW of gas-fired retirements
less 48 MW of new gas generation).

Assessment of Reserve Margins
The unloaded capacity margin is the metric the 2018 Assessment is using to portray the
capacity that is available to ISO operations to utilize for spinning and non-spinning
reserves and any additional capacity that can bring on line in a short period of time.
Whenever the unloaded capacity margins is at or below the level of the operating
reserve requirement for any given hour (typically around 6 percent) the unloaded
capacity margins is equivalent to the capacity available to meet the operating reserve
requirement for that hour. To assess resource adequacy, the analysis reviewed the
operating reserve margins at or below 6 percent and above 3 percent, the range where
a stage 2 emergency could be declared. Of the 2,000 scenarios run by the model over
half (1,035) produced at least one hour where the operating reserve was within this
range, with the majority of these (767) having a duration of only 1-2 hours over the
entire summer season.

Of the 2,000 scenarios, 26 produce operating margins at or below a 3 percent margin,
the range where a stage 3 emergency may be declared. For most of the 26 scenarios
(21) stage 3 conditions occurred in only 1 or 2 hours. Under this more severe operating
condition, the ISO will issue a notice of potential load interruptions to utilities – whether
actual interruptions would occur depends on the specific circumstances and potential for
recovering reserves.

Solar generation profile vs.
Minimum Unloaded Capacity Margin Occurrences
The month of September experiences the greatest number of occurrences where the
operating reserve margin dropped below 3 percent, the point of initiating a stage 3
emergency. The only result outside of September was one result in July. This is a
function of the below normal hydro year where available hydro energy drops off in
September.

Aliso Canyon
The results of the latest studies and recommendations by various state agencies on the
operating restrictions of Aliso Canyon going forward and the projected impacts to
electric system reliability are being assessed by the ISO, Los Angeles Department of
Water and Power, California Energy Commission and California Public Utilities
Commission (Joint Agencies). The results of the Joint Agencies assessment for this
summer and beyond will be presented in a report that is expected to be released in
early May 2018.

The outlook for energy reliability in Southern California remains challenging due to
uncertainty about the status of its natural gas system. The challenges to the gas system are
greater than for the previous two summers and leave SoCalGas unable to meet demand on
a 1-in-10 peak day without potentially having to curtail gas to the electric generators in the
Southern California or using gas from the Aliso Canyon underground gas storage facility.
The challenges stem primarily from continuing outages on as many as four key natural gas
pipelines. The ability for the ISO electric system in Southern California to maintain electric
reliability at lower gas burn levels is the result of a combination of transmission upgrades
and some generation retirements. As a result with even greater system risk to electricity
reliability this summer than last, measures to mitigate the risk remain necessary.
The risk associated with the gas storage facility restrictions at the Aliso Canyon and other
gas storage facilities to electric reliability is greater in the local reliability areas in Southern
California than to the ISO system. However, from a system perspective, the ability to resupply
from electric supply sources not impacted by SoCalGas limitations may be more
constrained then in previous years.

Since 2016 the ISO has implemented several operational tools and market mechanisms to
mitigate the electric system reliability risk posed by the restricted operations of Aliso Canyon.
In 2016 FERC temporarily approved some tariff provisions while approving others as
permanent changes. Because Aliso Canyon remains under restricted operations the ISO
requested in December 2017 that FERC extend the temporary measures for one year,
which FERC approved.

Preparation for Summer Operation
Producing this report and publicizing its results is one of many activities the ISO undertakes
each year to prepare for summer system operations. Other activities include coordinating
meetings on summer preparedness with the Western Electricity Coordinating Council
(WECC), California Department of Forestry and Fire Protection (Cal Fire), natural gas
providers and neighboring balancing areas. The ISO’s ongoing relationships with these
entities help to ensure everyone is prepared for potential times of system stress.